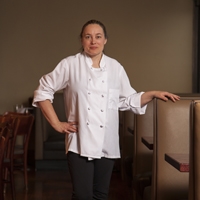 Sarah Stegner has received numerous accolades that built her reputation and that of the Dining Room at the Ritz-Carlton. She was competitive early. In 1990, she represented the United States in the prestigious Prix Culinaire Internationnal Pierre Taittinger, a multinational cooking competition. She was the only woman to compete; she placed fifth.

The recognition began in earnest in 1994 when she received the Rising Star Chef of the Year award from the James Beard Foundation. In 1995, she received the Robert Mondavi Culinary Award Of Excellence. In 1996, 1997, and 1998 she was nominated for Best Chef: Midwest by the James Beard Foundation, winning the prestigious award in 1998.  Stegner is currently the owner and chef along with George Bumbaris of Prairie Grass Café in Northbrook. Sarah is also one of the original founding members of Green City Market with GCM's founder, Abby Mandel.