Below, you will read the account of the devastating fire at Finn's Ranch and the resiliency of a family dedicated to nourishing us all despite the tragedy.

Green City Market (GCM) has launched a Farm Forward Fund | Crisis Response Award that is available for Green City Market vendors experiencing extraordinary financial constraints due to a crisis. The award provides temporary, short-term financial assistance to current vendors who are unable to meet essential expenses due to a temporary or unexpected hardship.

GCM has awarded an initial $5,000 Farm Forward Fund | Crisis Response Award to help the Finn family recover but they have lost their entire Operations Center and its contents, including more than half of their product inventory for the current season. More help is needed and you can provide it. The Finn family has nourished us with their organic, pasture-raised meat for years. They need us now.

Please make a tax-deductible donation in support of their recovery efforts. Your donation will directly support Finn's Ranch's recovery.

The Fire At Finn's Ranch

Farming is a relentless pursuit. More than a career, it's a calling that requires a level of grit and tenacity unmatched by other professions. Regardless of the conditions outside or a farmer's feelings inside, the work must get done.

And, on a farm, the work is never done.

But as challenging as it sounds, for Sean and Alex Finn, it's a labor of love. Nine years ago, the couple took a Sunday drive to the West side of Buchanan and fell in love with a blue farmhouse on a hill. They packed their belongings and two little boys and traded a suburban neighborhood in South Chicago for fourteen acres of land on a dirt road. They became a part of the community and took a chance on a new way of life, and Finn's Steak and Eggs Ranch was born. What started as a few chickens and a couple of cows has turned into a thriving family business providing all organic, 100% grass-fed, pasture-raised meat to farmer's markets (and pick-up locations) throughout Chicagoland and surrounding areas.

Farmers, in general, are undoubtedly a resilient bunch, and the Finns are no exception. It takes years, and an incredible amount of work, for a farm to become truly operational. For the Finns, it's a family affair, and their two teenage sons, Nico (16) and Matt (13), help keep the farm running.

This past Spring, the Finns had finally generated enough meat for the first time since they started this crazy adventure to have a substantial stockpile to meet demand. According to Sean, "All the hard work finally paid off. We'd spent all winter building up our inventory and were finally ahead of demand for the first time ever. We were ready for market season, prepared with enough meat to make it through without running out or scrambling to fill orders."

And then tragedy struck.

On Saturday, June 4, just a few weeks into the summer season, Sean and Alex were wrapping up another market day in Chicago when they received a call from home that would turn their world upside down.

Their younger son, Matt, was inside the family's house when he heard a loud explosion around 3:00 in the afternoon. When he went outside to investigate, he discovered the farm's Operation Center in flames.

This large metal building, a detached structure steps from the house, served as the farm's central hub and contained all the tools, vehicles, and supplies necessary to maintain daily operations. It also included multiple industrial-sized walk-in freezers containing a substantial inventory of stockpiled meat.

Matt sprung into action and attempted to put out the flames with the fire extinguisher, but it was growing too quickly. He then tried the regular garden hose, but to no avail. Realizing the severity of the situation, he called 911 and then called his Dad.

It's hard to imagine Sean's double dose of despair and helplessness when he received that call from his teenage son. Two hours away from home and unable to provide immediate assistance, Sean called his Dad, who was at a baseball tournament with his oldest son (Nico), knowing he could reach the farm faster. With Nico in mid-game at the ballpark, Matt on the scene, and Grandpa on the way, all Sean and Alex could do was wait by the phone and scramble to get home.

When the fire department arrived at the farm, the building was engulfed in flames. It took three fire trucks and 40 firefighters to put it out. Because it was a metal structure, the fire burned so hotly that it even melted the vinyl siding on the house. According to the Fire Inspector, five more minutes and the house would've caught on fire.

After the firefighters extinguished the flames, all that remained was a massive pile of rubble. Upon surveying the damage, it became clear it was a total loss. 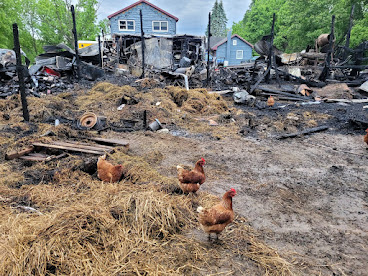 Nothing remained of the building or its contents. The farm's prized stockpile of meat was gone.

The walk-in freezers were now a mangled mess of metal.

Every tool needed to maintain daily life on a farm, every work vehicle required for everyday chores, and every can of oil and bag of seed were all destroyed.

The destruction was immense, and its impact devastating.

Sean said, "We'd spent all winter building up our inventory. We were finally ahead for the first time since starting the farm nine years ago. That's what hurts the most, we'd reached the goal of having enough to make it through the summer, and this fire comes and wipes that out."

Alex agrees, adding, "It’s devastating. The resources we've collected over the years to run a farm are all gone. Emotionally, it's overwhelming, but we haven't had time to process the loss because we are in the middle of market season, and the show must go on."

Despite the pile of wreckage in their front yard, the family didn't have much time to grieve the loss as another market day loomed on the horizon. Luckily, they'd rented a warehouse in Chicago to store some of their product, so they had a small supply to keep going.

However, more than half of their meat stockpile for the season was destroyed — a significant loss for a small family farm.

As anyone who's dealt with a fire knows, the insurance process is tedious and exhausting, adding another layer of frustration to an already overwhelming situation. And the process takes time, something the Finns don't have much of with colder weather only a few months away. The debris remains until the process is complete, and the charred pile of mangled metal and ashes is a constant reminder of the heartbreak.

Sean says, "It's depressing to look outside every morning and see a pile of rubble representing all that we've worked so hard to build. Beyond that, the impact on daily operations is immense. Things break on a farm, and every time I go to work on something, I realize that what I need to fix it was in the Operations Center. All the tools and supplies I need to run the farm are gone. I have to improvise because I don't have the money to replace everything I lost."

When farming is your livelihood, you must keep moving forward to keep money coming in. And despite the heartbreaking loss representing years of blood, sweat, and tears, the work never ends on a farm.

And winter is coming.

It's back to square one for The Finn Family, who must work quickly to rebuild their dreams, their Operations Center, and their inventory amidst the ashes. Farmers are resilient and reluctant to ask for help when they are used to pulling up their bootstraps and getting the job done. Yet, when a single event, an electrical fire caused by a mouse chewing through a wire, threatens the family's livelihood, it's time to circle the wagons and call in the community for help.

Here's where you come in.

As supporters of The Finn Family, you can help them rebuild with a donation to restore daily operations for the farm. Although a monetary donation can't replace the hours of lost work, it can help with the cost of a new building and replacement walk-in freezers. Your assistance will lessen the burden of a difficult loss and restore peace of mind to a family that built their livelihood on a little piece of land. When hope is all you have left, hard work is the only option that remains.

The Finns don't lack the resolve to rebuild; let's ensure they have the resources to do so.

Subscribe to get stories, recipes, and the dirt on what’s happening at Green City Market.