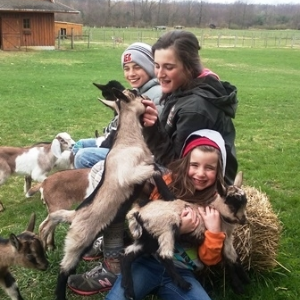 J2K CAPRAIO is a family cheesery located in Walkerton, IN, only 78 miles from Chicago. Their artisan cheese-making operation is accomplished entirely by hand; they raise and milk the goats, handcraft, age, and sell the cheese. The family also purchases organic cow milk from a neighboring family farm to make corresponding cow milk cheese in all your favorite goat varieties!

The Klinedinsts have owned goats for many years, but their dream of an on-farm cheesemaking adventure began in 2008. To become more self-sufficient and use and share the goodness of the goat’s natural byproduct, the couple took a leap of faith. It took three years to make the dream a reality and now they have been handcrafting cheese for ten seasons, never looking back. Over the years they have added Indiana’s only underground cheese cave where some cheese styles are developed and aged enhancing flavor, texture and terroir (a.k.a. nutritiousness and deliciousness)!

The J2K family consists of Josiah & Jody Klinedinst (J2K) their children Sofia, Joey, Frances, and Nicolas as well as a supporting staff Ryan (Affineur), Shawn (Cheesemaking Apprentice), Lauren (Monger), and Rusty (Cheese Dog) all of whom you will see at the Market and play a critical role in the success of this specialty operation!

"Once you get to know our family, you’ll understand our methods, appreciate the effort put forth, and Taste the Experience!" Jody says.